I had always been interested in playing Paintball since it first came out. Finally in 1991 I decided to see if there were any local Paintball Fields in my area. I looked in the Yellow Pages and found that there was a Paintball Supply Store close by.

I walked into Central Command Paintball Supply and met Jason McCarty. After talking to him for quite awhile, I decided I wanted my own gun instead of a rental. I bought an Air Gun Designs .68 Automag. When I came back to pick up my gun I met the owner of Central Command, Ronnie Howell. With the help of Jason and Ronnie I started playing Paintball and loved it. I became good friends with Jason and Ronnie as well as other players I met.

The one problem with playing Paintball was the cost of the paint. If the Paintballs were cheaper it would help stimulate the growth of this sport in my area and allow us to play more often. I started looking into manufacturing Paintballs. After some research I knew the best decision would be to become involved in a distribution deal with PMI Marketing and private label my own brand of R.P. Scherer Paintballs. Venom Brand Paintballs was born. I got my first shipment of Paintballs from R.P. Sherer and although the cost of the Paintballs themselves was good, the shipping cost was a killer. The following orders would need a new plan to lower the cost.

Jason worked at Central Command part time. His full time job was at a print shop. I went to Jason and he took my ideas and made the first Venom Paintballs Box Label. We took the labels to my warehouse and attached them to the Paintball Boxes. I did not make a killing selling the paint. My goal was to help the local fields and stores be able to stock lots of paint at a price lower than they could get anywhere else. This would help them stay in business as well as make Paintball affordable to many more people. I sold to two Paintball Stores on consignment so they could have lots of paint on the sales floor. Each week I would make deliveries to the two stores and the  two Paintball Fields.

For the second order I was to receive from R.P.Sherer in Tampa, I decided to drive there from Fort Lauderdale and pick up the order with my pick up truck. I measured the truck and the paintball boxes and placed as large an order as physically possible that would fit in the truck. The pile would be pretty high and would need to be covered and strapped for the ride home. We got there and started loading the truck. Pretty soon it was apparent that this load was way to heavy and large for the truck. I did not want to leave anything behind and look bad in the eyes of R.P. Sherer or P.M.I., so we stacked it and stacked it. That was one scary ride back home. The suspension of the truck took a beating and bottomed out the whole way back. After calculating how much I saved in shipping versus how much I spent on the trip it was a win. The paint was much cheaper. The paint started to sell really well and by the third order I was ordering enough paint to work out a deal for free shipping. Thank God for no more trips to Tampa.

One of the guys I met while playing Paintball was named Scott. He was a young artist that was going to art school. I hired Scott to design me a new Venom Snake Head to use on all things branded Venom Paintball. He did a fantastic job in designing the Venom Snake Head based off my instructions. it came out just the way I imagined it. It is the Venom Snake Head used on this site and in the photo of the patch below.

As Venom Paintballs were selling very well I decided to help sponsor Ronnie Howell’s Paintball team. The team was named Nemesis. I bought them all new uniforms with the Venom Patch below to be attached.

As time went on, the only two local Painball Fields shut down. Not due to no players,  they both lost their leases on the property they were using. Unfortunately with both fields gone, sales of  Venom Paintballs collapsed. Eventually Central Command closed it’s doors also. I sold out of all the Venom Paintballs in time and kept 10 cases for myself to use.  It’s funny that the land was never really used for anything else and a new Paintball Field opened up years later in the same place

I have not played Paintball in quite a few years. I still have all my equipment except the .68 Automag. I think I have some photos from a 24 Hour Scenario game we all played in Central Florida, I will look for them.  I wish I had taken photos of My .68 Automag once it was all chromed out and modified…….. 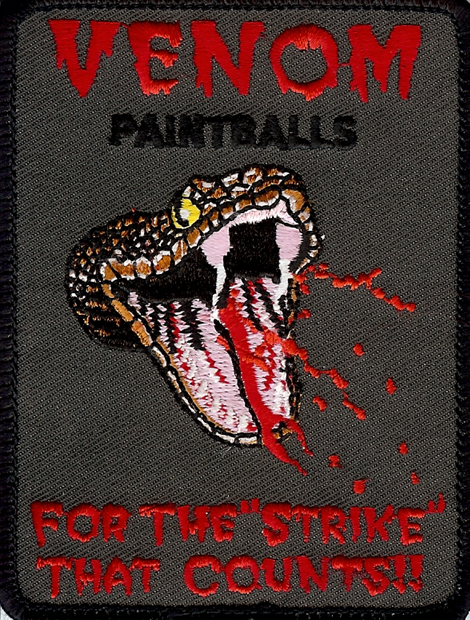 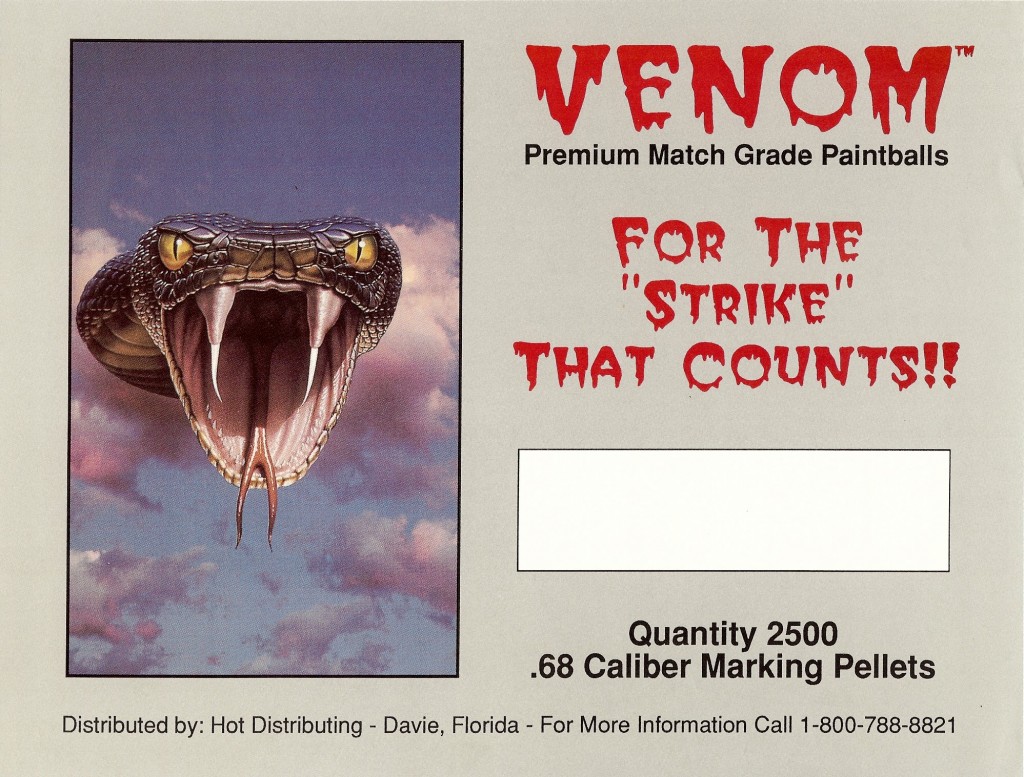